This weekend I visited Krakow with my friend Christine. Among the most noteworthy places in the city are Wawel Castle and Cathedral. In this place, many Polish monarchs are buried, but foremost in the cathedral is the tomb of someone honoured principally for the nobility of his death as a martyr.

Stanislaus of Szczepanów or, Stanislaus the Martyr (July 26, 1030 – April 11, 1079) was a Bishop of Kraków who was martyred by the Polish king Bolesław II the Bold.

For nearly 1,000 years, this Saint has been venerated by Catholics and celebrated by patriotic Poles. When John Paul II became pope in 1979, it was the 900th anniversary of the death of this patron of Poland, prompting John Paul II to marvel that, “by the inscrutable designs of God, he, who a short while before had been the successor of Saint Stanislaus in the episcopal see of Krakow, has been elected to the see of Peter as Supreme Pastor of the Church.”

He expressed this wonder in one of his earliest Apostotolic Letters, Rutilans Agmen, On the Ninth Centenary of the Death of Saint Stanislaus Bishop and Martyr.

Together at the tomb of Saint Stanislaus, Christine and I took turns reading John Paul II’s letter. To combat the “globalization of indifference” (Pope Francis) that has its origin in our own hearts, we thought, let us commemorate martyrs – historical and contemporary. After all, when the four Missionaries of Charity in Yemen were murdered  less than two weeks ago, Pope Francis declared them “the martyrs of today” and remarked, “They gave their blood for the Church.” This awareness was front of mind and we could notice that John Paul II began his Letter about Saint Stanislaus with a similar acknowledgement:

Behold this image of that tomb and read with us the excerpts below:

[…] Rightly Saint Augustine says: They asserted Christ more when they were dead than when they were alive. Today they assert him, today they preach him: their tongues are silent, it is their deeds that speak.

[…] The Apostles, therefore, went out from the Cenacle at Pentecost. Likewise from there, their successors go forth down through the ages. In his day, Saint Stanislaus, of the village of Szczepanow, also went forth from there, bearing within himself, the gift of fortitude to give witness to the truth of the Gospel even to the shedding of his blood. That generation of nine centuries ago was indeed the generation of our ancestors, who like Saint Stanislaus, their Bishop in the see of Krakow, are the bone of our bone and blood of our blood. The time of his pastoral ministry was short. It lasted from the year 1072 to the year 1078, namely seven years, but its fruit still remains. Certainly Christ’s words to the Apostles: “I have chosen you that you should go and bring forth fruit, and that your fruit should remain” (Jn 15:16), have been verified in him.

[…] The places connected with the life and death of Saint Stanislaus are the object of religious veneration. There is a very special devotion to the Saint in the cathedral in Krakow, which is built on the “Wavel” hill and where his tomb stands, as well as in the church in the village of “Rupella” and in his native village of Szczepanow, which is now in the diocese of Tarnow. His relics are the object of veneration, especially his head which to this day shows clear traces of the deadly blows inflicted nine centuries ago. Every year the inhabitants of the royal city and devout pilgrims from the whole of Poland flock to honour these relics of the head with a solemn procession through the streets of Krakow. In past centuries the kings of Poland even took part in this procession. They were the successors of Boleslaus the Bold, who, as has been said, put Saint Stanislaus to death in the year 1079 and, as is recorded, was reconciled to God and died away from his fatherland.

[…] Does not this fact have some special significance? Is it not a proof that down the centuries Saint Stanislaus has been an instrument of reconciliation by which the citizens of the nation itself, whether they are in authority or under authority, are reconciled to God? Does not this imply a special spiritual relationship in which—through the help of this martyr—all have become sharers and are being continually made such?

[…] Year by year the Church in Poland cherishes this heritage. Every year she goes back to this noble tradition of Saint Stanislaus, which in some way is a particular patrimony of the spirit of Poland. In this year of our Lord 1979, the Church in Poland, in her peculiar situation, desires to remind herself of this heritage. She wants to ponder it more deeply and to draw from it some considerations relevant to daily living. She needs help in fighting against apathy, crime, and sin, which are especially detrimental to the good of the Poles and of Poland. She seeks through a renewed protection to strengthen the faith and hope in the future, so that she may carry out her mission and serve the salvation of one and all. 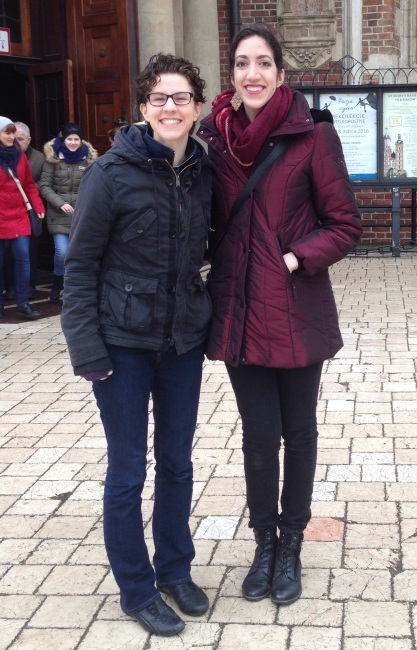 It’s awesome studying noble lives because it brings home the reality that we’re all made to live lives of heroic virtue. It’s even the case that we’re all called, in different ways, to the mini-martyrdom of daily dying to our selfishness and giving ourselves lovingly to others – to our families, friends, communities, and to strangers in our paths.

Relics – from the meaning “to leave behind” or “remain” are our physical reminders of noble lives. When there seems to be an extraordinary gap between my life and the lives of the saints, a relic of a saint reminds me of their humanity and attests that their existence was both worldly and spiritual, not spiritual alone.

As the beautiful churches and art I see point beyond themselves to Beauty itself, so the dignity and sanctity of the noble lives I study point beyond to Goodness itself: God is generous to give us such tangible, personal, and experiential reasons for our hope.